Nancy Duncan joined the Planning Council in 2007 because she wanted to be a part of the process of allocating the Ryan White funding on Long Island. As she explains, “It's important, this payer of last resort money gets directed to the services which require it the most”.  She is also a recipient of this funding.

Born and raised on Long Island, she has always been grateful to live here. She attended Nassau Community College, but didn't get a degree. A letter carrier for years, she had to stop working in 1992. Now 62 years old, Nancy is very grateful to still be here and watch her son grow into an amazing adult. She muses that there was a time when she didn’t think she would see 40, but now she was able to see her son turn 40 years old.

Nancy has been an HIV testing counselor at Planned Parenthood of Greater New York since 2004, trying her best to make a difference in reducing HIV exposures and helping people who are living with HIV become more educated and know they are not alone. In 2016, Nancy joined the Center for AIDS Research and Treatment at Northwell as a part-time peer worker, where she puts out a monthly CDC intervention newsletter called Positively Speaking. She also facilitates a treatment adherence support group.

A fun fact about Nancy is that she loves to play pinball though it's very hard to find them anymore.  She also enjoys getting together with her friends and just acting silly sometimes.  A real people watcher, she enjoys walking around in New York City and enjoying the energy there. Her favorite movie is Desperately Seeking Susan. She enjoys classic rock and David Bowie has been her favorite singer since she is 12 years old

The fight against AIDS is important to Nancy because this epidemic is not over yet. She feels that people have become complacent and don't realize they can still get HIV if they put themselves at risk.  “Since we don’t have a cure or vaccine, education is the key.”  She educates others about U=U (Undetectable=Untransmittable) because many don't know about the benefits of maintaining an undetectable viral load by taking their antivirals the right way.  As she explains it, “I survived a plague as I've been living with HIV/AIDS going on 35 years now. I've been fortunate to be able to give back over the past 22 years by volunteering and working in the HIV field and I hope my legacy will be that I made a difference even it's just a small one”. 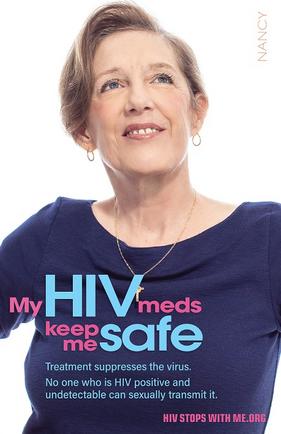